But Peter declared, “Even if I have to die with you, I will never disown you.” And all the other disciples said the same. – Matthew 26:35

When Jesus was speaking about His coming death, Peter boldly stepped forward. Chest puffed out, he confidently tells Jesus that he has His back. “Not me. I’d rather die than be parted from you!”

Peter’s sentiment is sweet but false. For the very night that Jesus is taken into custody, Peter is asked three times if he was with Jesus and he denies it.

Yet how often do we do that? We claim to love Jesus, but that doesn’t stop us from coveting someone else’s house or stabbing a co-worker in the back to get that promotion. We scheme, lie, and manipulate.

Then the rooster crows, and we are reminded of our failure, of how fickle our hearts really are. So, we ask the same question that Peter most likely asked, “How can You still love me?”

But take a peek at Peter’s first encounter with Jesus…

Jesus looked at him and said, “You are Simon son of John. You will be called Cephas” (which, when translated, is Peter). – John 1:42

The truth is Jesus doesn’t just see who you are. He also sees who you will become. He knew that the fisherman who would deny Him three times would also bear witness to thousands that Jesus was the Messiah.

If you’ve sinned, don’t run from Jesus. Confess it humbly and seek forgiveness. There’s no condemnation waiting for you. Jesus knows your true identity isn’t found in your sin, but in His love.

Lord, I confess my sin. Like Peter, I had a chance to stand with Jesus, but I denied Him. Help me to remember my sin doesn’t define me—Your love does! In Jesus’ name, Amen. 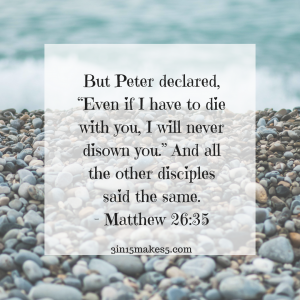