“Also, seek the peace and prosperity of the city to which I have carried you into exile. Pray to the LORD for it, because if it prospers, you too will prosper.” – Jeremiah 29:7

Bethany’s husband needed to move for his job. She loved where she lived in the mountains, and she hated the thought of moving to sunny Arizona. Her husband promised that when his contract was up, they would return to her beloved town.

So, Bethany packed her things and readied her children. Her husband moved to Arizona first, and a few weeks later, the rest of the family followed.

She settled the kids into a routine at their new school, but she stayed pretty isolated. She kept thinking of her new move as temporary until she read Jeremiah 29:7.

“I realized that if God moved me to a different city, then He had a purpose. And maybe that purpose isn’t just for me. Maybe there are people I’m supposed to reach out to and love on.”

With this new attitude, Bethany began putting down roots and getting involved in the community. She built friendships with other moms in the area and was surprised when one day she found herself happy.

“I realized that peace doesn’t depend on where I am. I can experience peace in the in-between places of my life.”

Lord, sometimes I struggle with the in-between. I confess, I just want this season over and done with. But maybe that’s not what You want. Your plans are always so much better than my own so help me to lean into You during this season. In Jesus’ name, Amen. 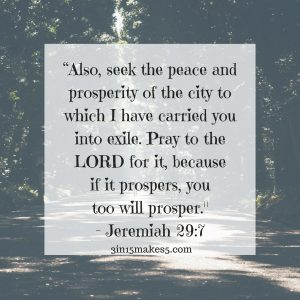