Then he fell on his knees and cried out, “Lord, do not hold this sin against them.” When he had said this, he fell asleep.  – Acts 7:60

Stephen was a passionate Christian in the early years of the church. Like others, he had greatly angered the religious leaders of the day by proclaiming that Jesus had risen from the dead.

So, Stephen was taken into custody. False witnesses were produced, and Stephen was asked for his response. He spoke eloquently about God’s history with the nation of Israel and how the religious elite had murdered Jesus.

At this, Stephen was dragged outside and stoned. As the rocks were hitting him, Stephen made an interesting plea. He asked God not to hold this sin against those who were persecuting him.

Of all the prayers Stephen could have offered up, he didn’t pray for himself. He prayed for those who were hurting him. What an example of grace and mercy!

You may be called into a situation where you need to proclaim truth even when it’s unpopular. Perhaps you have to report the budget, and your boss wants you to fudge some of the numbers. Maybe you have to take a stand against evil in your community.

It’s never easy to do these things, but you can rest in the knowledge that God is with you. Like Stephen, you never have to face the mob alone.

Lord, give me the strength to stand up for what’s right. Help me to tell the truth and proclaim it boldly, even when other people wish I wouldn’t. Grant me the compassion to be gracious to my accusers. In Jesus’ name, Amen. 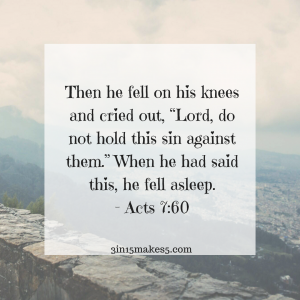