“While David was sitting between the inner and outer gates, the watchman went up to the roof of the gateway by the wall. As he looked out, he saw a man running alone.” – 2 Samuel 18:24

It must have been one of the darkest days of David’s life. He and his household are on the run. Not from an enemy or a foreign government that has sought to overpower the nation of Israel.

No, he’s running from the threat within his walls—his own son, Absalom. When David sees the messenger coming, you can feel his hope welling up. “This has to be good news,” David whispers.

But the news that comes is a mixed blessing. The threat is gone—Absalom is dead. David and the kingdom have been delivered. But David cannot rejoice. His pain is too raw.

God sometimes allows a situation to work out differently than we hoped. David had most likely asked for a peaceful resolution.

Maybe you hoped God would heal your marriage and instead, He set you free from a verbally abusive spouse. Perhaps you asked God to save your business, and instead, He provided a different job for you.

These are hard moments when pain mixes with peace. Rest assured, God is still working on your behalf. He still plans to do good for you.

Lord, please help me. This is not the answer I was hoping for, and I won’t hide my disappointment. But I also know You’re sovereign. You’re still in control, and I rest in that truth. In Jesus’ name, Amen. 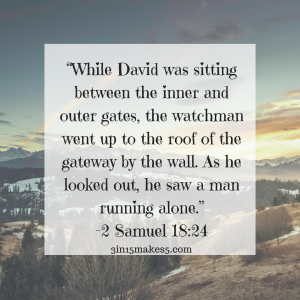