Samuel was a prophet of the Lord. It was his job to give the nation of Israel the messages that God told him to share. Sometimes, God gave Samuel special assignments.

When the Israelite people demanded a king, God sent Samuel to anoint Saul. But Saul was not fully devoted to God, so He rejected him. He told Samuel to anoint another king, one from the lineage of Jesse.

So, Samuel went to Bethlehem as the Lord had instructed him. He purified Jesse and his sons. Then he looked critically at the boys. The eldest caught Samuel’s eye. He was certain God meant for this young man to be the next king.

Each son passed in front of Samuel, but something was wrong. The Lord hadn’t picked any of the boys. Samuel was stumped. What did this mean? Then an idea struck him. Turning to Jesse, he asked, “Do you have any more sons?”

Jesse nodded, explaining the youngest boy was in the field where he was tending to the sheep. At Samuel’s request, he called the boy in.

David had been overlooked by his earthly father. If you can relate to that, rest assured that David was not overlooked in the end. For his Heavenly Father saw him and blessed him richly all the days of his life.

God, when my family overlooks me or ignores me, help me to remember that You see me. I am Your child, and You love me deeply. In Jesus’ name, Amen. 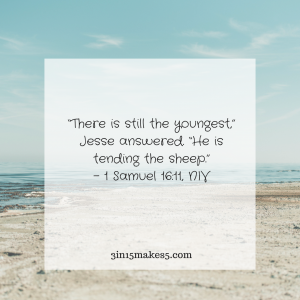