When Dan’s father, Bill, was diagnosed with an advanced stage of colon cancer, he booked a flight and rushed to his dying father’s bedside. There, he spent the last moments of his father’s life with his family. He looked through old photos, laughed about memories from years gone by, and sang Gospel hymns to his father.

After the funeral, Dan heard from many people in the community. Someone mentioned how Bill had paid for his family’s groceries when he lost his job. Another fondly remembered Bill teaching Sunday school. A close friend talked about the way Bill treated him as another son when the young man had been fatherless.

A few weeks later, Dan participated in a charity race. The funds he earned went toward colon cancer research. But Dan found the race therapeutic. When he crossed the finish line, he felt as if his father were smiling on him from Heaven.

Lord, my heart hurts. My parent has died, and now I feel lost. Comfort me. Reassure me. Gather me in Your arms. I need You to walk with me through this season. In Jesus’ name, Amen. 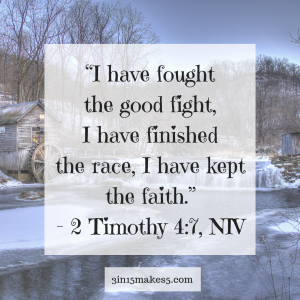