“The Lord bless you, my daughter,” he replied. “This kindness is greater than that which you showed earlier: You have not run after the younger men, whether rich or poor.” – Ruth 3:10, NIV

Ruth was a woman who extended grace to her mother-in-law, Naomi. Although Naomi encouraged Ruth to return to her family and seek out another husband, Ruth refused.

Instead, Ruth traveled miles with Naomi to help the older woman return home. But this was not enough. Ruth also went to the fields daily, to collect food so she could support Naomi.

Ruth had no legal obligation to her mother-in-law. She could have left the older woman, but she chose instead to stand by her. She cherished her family and brought honor to her late husband by choosing to marry one of his relatives.

Sometimes, God calls us to extend grace by staying loyal to someone else. Maybe God has called you to stay faithful to a spouse that committed adultery or to honor a family member who has been unsupportive. Rest secure in the knowledge that God sees your kindness, and He will bless you—just as He did Ruth.

Lord, give me the courage to be loyal during times of hardship. Like Ruth, I want my actions to honor You. In Jesus’ name, Amen. 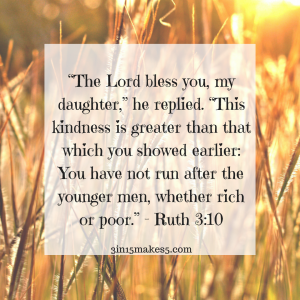