“Above all, love each other deeply, because love covers over a multitude of sins.” – 1 Peter 4:8 (NIV)

When Caleb was two years old, his father went to prison. He’d been driving drunk and killed someone else. The prison sentence meant Caleb rarely saw his father and felt like a stranger on the few occasions they were together.

“I spent years angry at my dad,” Caleb says. “But when I was in college, I started reaching out to him. I don’t know what I was looking for, but I knew I was tired of being angry.”

Over the course of letters and phone calls, Caleb forgave his father. “I knew he was up for parole in a few months, so I started putting together resources. I realized the world had changed so much in the last two decades. When he went in, cellphones were the size of bricks.” Caleb laughed.

Caleb helped his father adjust to life outside prison and convinced the manager of a local store to give his father a job as a cashier. A few years later, his father passed away from liver problems.

But Caleb keeps his legacy alive by reaching out to other prisoners. “The older guys have a tough time readjusting to life outside. So I’m here to help them re-enter society. I teach them things like how to operate a smartphone, surf the web, use self-checkouts; all the basic activities that most people don’t think about.”

Caleb smiles, “It’s my mission field. I get to be a light to these prisoners, a port welcoming them home. I think that’s pretty awesome.”

God, help me be a light to those around me. I want to show those who feel worthless or marked Your abundant love. In Jesus’ name, Amen. 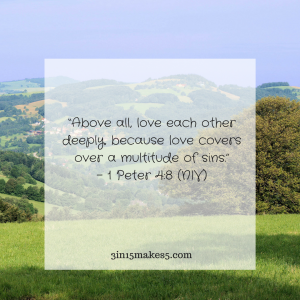