When an angel arrived to tell Mary she would become pregnant with Jesus, the Messiah; she was quick to surrender her plans for His. She called herself the “Lord’s servant” and accepted what the angel had told her.

What makes Mary’s response so fascinating is the culture she lived in. In her time, a woman becoming pregnant out of wedlock was punishable by stoning. She was literally risking death to bear Jesus.

But we never see her express fear or doubt about the pregnancy. To be at peace, Mary had to let go of what other people might think and focus on her identity as God’s beloved daughter.

It’s easy to get caught up in what other people think about you. You overhear someone spreading lies about you, and your first instinct is to step up and defend yourself. You want to yell, “Hey! I’m doing what God told me to do here!”

But there’s never a record of Mary defending herself or calling attention to her situation. She simply accepted her identity and focused on God’s plan for her life.

God, when you ask me to trade my plans for Yours, help me to remember Mary. Let me be brave and ignore what others are saying about me. In Jesus’ name, Amen. 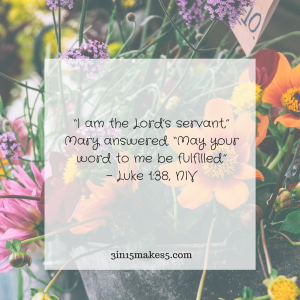