“But while he was still a long way off, his father saw him and was filled with compassion for him; he ran to his son, threw his arms around him and kissed him.” – Luke 15:20, NIV

Mary was diagnosed with multiple sclerosis in the late summer. A few weeks later, her husband asked for a divorce and moved in with another woman. As Mary grappled with these sudden changes in her life, she didn’t notice that small electronics were disappearing from her home or the cash that was no longer in her wallet.

With all of the stress, she blamed her faulty memory. It wasn’t until the police showed up to arrest her teenage son that she put the pieces together. Her son, Dwayne, had become addicted to pain pills and was breaking into other homes in the area to pay for the drugs.

Mary was crushed. She blamed herself for Dwayne’s problems. She kept thinking over his childhood, trying to figure out where she went wrong. Finally, she asked a friend for advice. “What did I do? Was I not kind enough to him? Did I ignore him when he was little?”

Mary’s friend listened to her questions. Then her friend quietly said, “God is the perfect parent. Sometimes, His children make bad decisions. But that’s not a reflection on Him. You can’t force your children to make wise choices.”

If you’ve been struggling with a child who is rebellious or doing drugs, it’s not your fault. You don’t have to carry the shame or guilt.

Lord, please help me. I’m tormented by my prodigal’s choices. Please bring this wayward child back to You. Let there be freedom from addiction and healing where he needs it. In Jesus’ name, Amen. 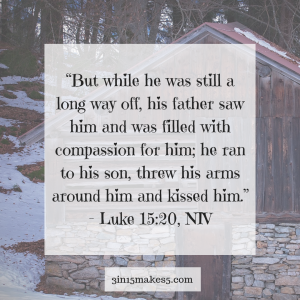