“Let us not become weary in doing good, for at the proper time we will reap a harvest if we do not give up.”  – Galatians 6:9, NIV

Cassie adopted Ethan when he was just a few months old. Even though it meant becoming a single parent, she felt like adoption was what God wanted her to do.

But Ethan wasn’t like other kids. He’d been born to a mother addicted to drugs, and he had several health problems because of it. His biggest struggle was with learning new information.

So Cassie had to work hard to help Ethan understand basic information like the ABCs. One day, she’d spent all afternoon working with him. She was about to give up when she remembered Galatians 6:9. The verse gave her the strength to keep working with her son.

But even after their session, Ethan didn’t appear to have absorbed a single letter. Discouraged, Cassie wondered if she’d ever be able to get Ethan to understand letters and words.

The next morning, Cassie went to get Ethan out of his bed. But she stopped when she heard singing. She kept listening then smiled as she realized, Ethan was singing the alphabet song.

God, when I encounter hard things, help me to lean in. Give me the strength to keep going even when I feel disappointed or discouraged. In Jesus’ name, Amen. 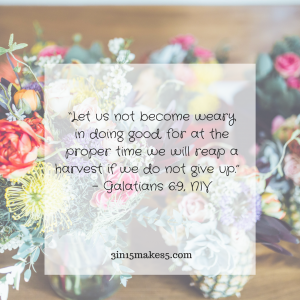