“Noah, a man of the soil, proceeded to plant a vineyard. When he drank some of its wine, he became drunk and lay uncovered inside his tent.” – Genesis 9:20-21, NIV

Ham, Noah’s son, comes into his father’s tent unannounced. What he sees stuns him. His father is sprawled across the bed, naked and exposed.

He immediately takes this information to his brothers. Perhaps Ham was surprised because he’d never seen his father drunk. Maybe he and his father had recently argued, and he was delighted to see him weak and vulnerable. Whatever his reason, Ham told his brothers about the situation.

When Shem and Japheth hear this, their response is different. Instead of spreading the information throughout the household, they grab a cloak. They walk backward into the tent to cover their father, never seeing his nakedness.

Each son had a choice that day. Ham chose to humiliate his father. Shem and Japheth chose to honor him.

This doesn’t mean that sins of parents should be ignored or covered in every situation. An angry parent who violently beats a child certainly deserves to be charged with a crime and punished.

However, this is not the case in the story of Noah. Rather, a loving father with a track record of seeking God has sinned. One of the sons shames his father.

Two of his sons choose to show grace, covering him with love as in 1 Peter 4:8, “Above all, love each other deeply because love covers over a multitude of sins.”

God, when others sin, help me not to rejoice in it. Instead, show me how I can show grace and kindness toward them. In Jesus’ name, Amen. 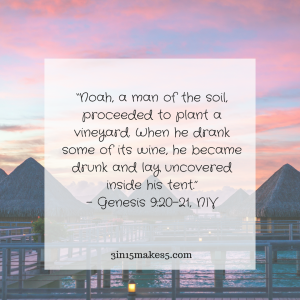