When God told Jonah to go to Nineveh and warn the people about the coming destruction, the prophet fled. He booked a seat on a ship, and he was having a good time…until the storm came.

Jonah’s knees quaked. Though he was with experienced sailors, he knew the storm was fierce. So at his request, the crew had Jonah thrown overboard. He landed in the belly of a large fish, where he stayed for three days.

On the last day, the fish spit him out onto the shore. Now, Jonah is ready, and he promptly heads to Nineveh to proclaim the coming doom. His message is simple: Repent while there’s still time.

When the land of Nineveh begins seeking God, Jonah grows angry. He was so focused on other people’s sins that he forgot about his own.

You see, Jonah didn’t fully comprehend the GRACE that God gave him. If he had, he would have rejoiced seventy times over that precious city coming to know his God.

Lord, when I’m tempted to judge others, remind me of how gracious You are. Let me always be quick to rejoice with the rescued and redeemed, no matter what they’ve done. In Jesus’ name, Amen. 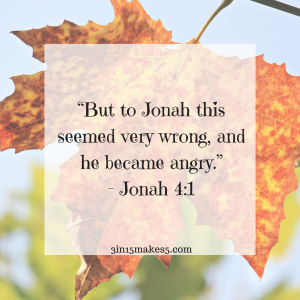