The Spirit of the Sovereign LORD is on me, because the LORD has anointed me to proclaim good news to the poor. He has sent me to bind up the brokenhearted, to proclaim freedom for the captives and release from darkness for the prisoners… – Isaiah 61:1, NIV

Neil had been traveling for a work conference. He’d booked an early morning flight in the hopes that he’d be home with his wife in time for dinner. But due to an unpredictable weather system, his flight was changed.

Then he learned that he’d been bumped from his second flight. No matter what he said or did, Neil couldn’t seem to catch a break. The airline offered to put him up in a hotel for the evening, but Neil declined. He really wanted to be with his wife, so he waited.

Finally, around ten o’clock that evening, Neil boarded the plane. He breathed a sigh of relief when he felt the plane lift off. He was counting down the hours until he could be with his wife.

When Neil glanced at the woman in the seat next to him, he realized she was reading one of his favorite books. They struck up a conversation about what books were on their summer reading list. Finally, Neil asked, “Why are you traveling so late? Did your flight get bumped, too?”

“Oh no,” the woman gave him an embarrassed smile, “I just helped my daughter into a rehab center.”

Neil shared the story of his brother’s addiction. “Don’t give up. God set Jonathan free after years of addiction. He can do the same for your daughter, too.”

Encountering delays can be frustrating. But sometimes, God orchestrates a delay so you can reach out to someone who’s struggling in darkness and desperately needs hope.

Lord, thank You for delays and setbacks! Everything serves Your purposes. The next time I’m delayed, let me remember this story and look for someone needing Your ministry. In Jesus’ name, Amen. 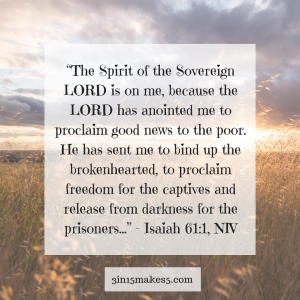