Frank listened as an argument broke out between his two kids. One had lied, and that was the cause of their fighting. When they brought him into the situation, Frank sent his daughter who was telling the truth out to play.

“But you,” he turned to his son, Travis, “have to sit in the corner until you confess what you’ve done and tell the truth.”

Travis stomped over to the corner, and Frank waited. While Travis could be stubborn, Frank was confident that the boredom from sitting in the corner would eventually win out.

But as the minutes turned to hours, Frank grew frustrated. Show me how to handle this, Lord, he prayed before going to sit in the corner beside his son.

“Travis, you know how our dog, Daisy, likes to knock over the trashcan?”

Travis turned to look at his dad and said, “Then she goes and hides.”

“Yep, but what happens when she comes back out again? I forgive her. I do that because I love her. I love you too, and that’s why I want you to tell the truth.”

“It makes me sad when you lie, but not angry.” Frank waited, hoping the words would be taken to heart.

“Because you love me?”

“Because I love you,” Frank answered in his most reassuring tone.

Sometimes, it’s tempting to hide out from God when you mess up. You might think that God will be angry with you for what you’ve done. But God is filled with compassion for His children when they confess.

God, I admit that I have sinned. I confess my shame and rebellion. Please create in me a clean heart and renew a steadfast spirit in me. In Jesus’ name, Amen. 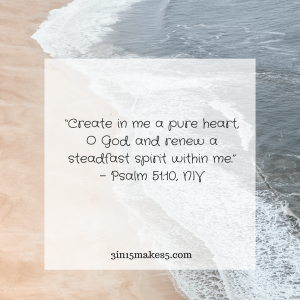