“In him we have redemption through his blood, the forgiveness of sins, in accordance with the riches of
God’s grace that he lavished on us.” — Ephesians 1:7-8, NIV

Michael Rowe was part of a drug gang in New York. In 1992, he and two of his friends killed another drug dealer.

He was arrested and sentenced to twenty years in prison. He used this time to better himself. He earned his GED, then went on to get his associate’s degree and a bachelor’s degree. He married his girlfriend and fathered three children with her.

In September of 2006, Michael was working in prison when he glanced up to see Anthony Colon, the brother of the man he killed. Anthony had been there to visit another inmate, unaware that Michael was there.

Michael tried to duck out of sight, but it was too late.

Anthony had seen him.

Michael’s heart sped up, and his mouth went dry as he wondered what Anthony would do to him. Would he yell at him? Cuss him out? Spit on him? Start a fight?

When Anthony approached him, Michael tensed. But the other man held out a hand and said to him, “I’ve been praying for you. I forgive you. I was praying for a chance to see you again and tell you that.”

Years later, the two men are friends. After being released from prison, Michael went to work with Exodus Transitional Community Center, the same organization where Anthony volunteers.

God, help me to accept forgiveness when it’s offered and to grant others that same mercy. Teach me to be gracious in giving and receiving forgiveness. In Jesus’ name, Amen. 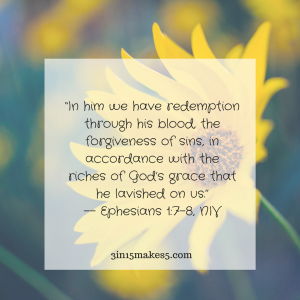