When a Samaritan woman came to draw water, Jesus said to her, “Will you give me a drink?”
—John 4:7

Shame clings to her like a cloak. It’s the only explanation for why she’s gathering water from the well during midday when the sun is at its hottest. She hopes to avoid the usual crowd, filled with gossiping women.

She’s spent her life pretending she doesn’t hear the words hurled at her. Dirty. Promiscuous. Homewrecker. Despite her tough girl act, the words sting. Her armor isn’t as strong as she pretends it is.

Lost in thought, she doesn’t see the man until He speaks. “Will you give me a drink?”

She frowns, instantly recognizing the man as a Jew. Being a Samaritan, she’s all-too-familiar with the judgment that comes from them. The two begin a conversation that changes her whole life.

Jesus healed the shame of an outcast woman that day. Not by ignoring her past or shoving it under a rug, but by acknowledging it. He was saying in essence, “I see your broken parts, and I love you just the same.”

God, you see beyond the labels that other people have given me. You see underneath my hurts to who I really am. Show me how to let go of this shame and embrace my identity as Your child. In Jesus’ name, Amen. 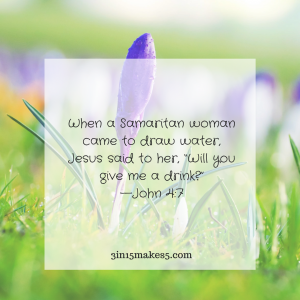