“The teachers of the law and the Pharisees brought in a woman caught in adultery. They made her stand before the group.”
—John 8:3

Smug smiles twisting their lips, they come to Jesus. They throw a barely covered woman onto the ground. Her near-nakedness is purposeful, to add to her shame and humiliation, to degrade her in every possible way.

One of them clears his throat and asks, “Teacher, this woman was caught in the act of adultery. In the Law Moses commanded us to stone such women. Now what do you say?” (John 8:4-5)

But Jesus is wise to their game. Ignoring them, He draws on the ground. When they press Him again for an answer, He doesn’t bother looking up. “Let any one of you who is without sin be the first to throw a stone at her.” (John 8:7)

One by one, there’s the sound of rocks dropping from hands. The smug smiles disappear as the Pharisees choose a retreat. The ones who humiliated the woman now feel the sting of it, too.

When they’ve left, Jesus looks up, “Where are your accusers? Has no one condemned you?”

“They’ve left.” The words are quiet. She prepares herself for the next round of accusations. But they never come.

God longs for you to know His mercy and forgiveness. He is gracious and kind to His children. He never excuses sin, but He loves the sinner.

God, thank You for Your mercy. So often, I mess up. I need that mercy every moment of every day. Thank You for setting me free from sin and taking away my shame. In Jesus’ name, Amen. 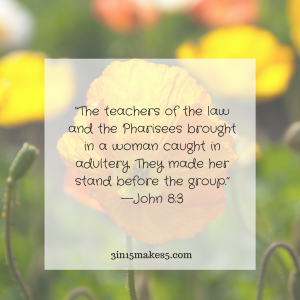