His brothers then came and threw themselves down before him. “We are your slaves,” they said. – Genesis 50:18, NIV

For years, Joseph’s brothers had felt uneasy. The puny kid they’d thrown down a well was now the second most powerful man in the country of Egypt. He would only need to speak a word, and he could have not just his brother arrested but their wives and children, too.

So when Joseph’s father finally passes away, the brothers are fearful. They send a message from their father asking for forgiveness.

With his father gone, there should be nothing stopping Joseph. Now, he can freely torment his brothers the way they did to him all of those years ago.

But Joseph’s response isn’t filled with hate or malice. Instead, it’s filled with grace and kindness. This is what he says to his brothers:

You intended to harm me, but God intended it for good to accomplish what is now being done, the saving of many lives. So then, don’t be afraid. I will provide for you and your children.” And he reassured them and spoke kindly to them. (Genesis 50:20-21)

At some point in your life, you may have the opportunity to take revenge on someone for a wrong they’ve committed against you. When that moment comes, remember the godly example of Joseph!

Lord, thank You for Your wise plans. When others intended to destroy me, You used their plans to redeem and rescue me. Help me to choose grace over revenge. In Jesus’ name, Amen. 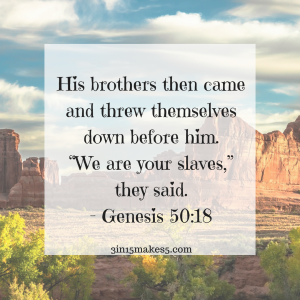