In Damascus there was a disciple named Ananias. The Lord called to him in a vision, “Ananias!” – Acts 9:10, NIV

Ananias had just snuggled deep into his bed. He’d spent a busy day, serving the Lord and providing for his family. But as he closed his eyes, he heard a voice call out to him plainly.

Immediately, Ananias sat up, his eyes flying open. He‘d recognize the voice of the God he served anywhere.

The Lord told him, “Go to the house of Judas on Straight Street and ask for a man from Tarsus named Saul, for he is praying. In a vision he has seen a man named Ananias come and place his hands on him to restore his sight.” (Acts 9:11-12)

Ananias immediately thinks of Saul’s reputation, and his knees begin to quake. Perhaps, he ponders, God has mixed this man up with someone else. So, Ananias gives God a quick refresher course on Saul’s bloody history. He reminds God that this man has persecuted and killed many Christians.

But God insists, so Ananias gets up and begins packing for the journey. When he arrives, he places his hands over Saul’s eyes and the other man receives his sight.

No one would have faulted Ananias for wanting to heal Saul from a distance. But he didn’t. Instead, he came close and even laid his fingers gently on the other man’s face. This gesture is more than simple courage—it’s healing wrapped in grace.

Lord, help me to be an instrument of healing like Ananias. Teach me how to show grace to the people that I don’t want to love. In Jesus’ name, Amen. 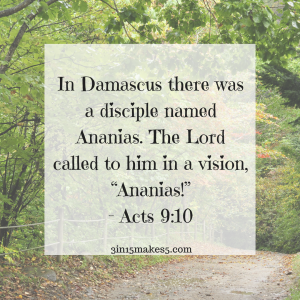