But the angel said to him: “Do not be afraid, Zechariah; your prayer has been heard. Your wife Elizabeth will bear you a son, and you are to call him John.”
—Luke 1:13

When she was young, Amy decorated the baby nursery. She picked the furniture with care; each item meant to shelter her little one. But her favorite piece was the rocking chair that had been handed down in her family for generations.

She remembered her mother and grandmother rocking her in it. Tucked deep under a thick quilt, they would sing her lullabies until her tired eyes would at last close in sleep.

But as time passed, Amy had no child for the nursery. The room sat unused, a sad reminder of the dreams that she knew would never come to pass. One word from the doctor had changed her life forever: infertility.

Then the day came. Amy was being silly; she’d told herself as she stood in line at the pharmacy to purchase the pregnancy test. But the two blue lines were proof her dreams had finally come true.

“The Lord has done this for me,” she said. “In these days he has shown his favor and taken away my disgrace among the people.” (Luke 1:25)

Elizabeth’s child would be named John. He would be known centuries later as John the Baptist, and his ministry would be to let the Jews know that the long-awaited Messiah was coming.

All of those years of infertility weren’t a punishment from God or a mark against her. God had waited to heal Elizabeth from infertility until the right time—His time. He did the same for Amy.

God, I thank You and praise You for answering all of my prayers. I confess I don’t always understand Your timing, but I trust You. In Jesus’ name, Amen. 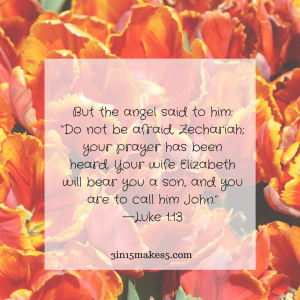