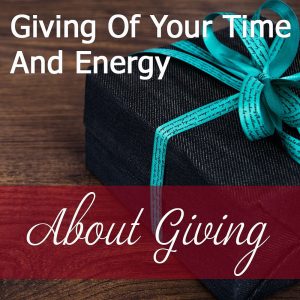 One evening Vince was mugged while traveling through a rough neighborhood. The attacker took all of Vince’s money, beat him, and left him for dead. The night was cold, and temperatures were expected to dip into the teens.

Two cars passed. Each driver saw Vince lying on the pavement, but neither would leave the comfort of their car to help him.

Then Richie drove down the street. He was on his way home to have dinner with his family, but an accident had forced him to take a different route. Seeing the injured man, he immediately stopped his car and went to him.

Richie grabbed his phone, prepared to call for help when he saw he had no cell reception. So, he did the first thing he could think to do. He gently carried Vince and put him in the passenger seat. Then he drove to a local hospital and stayed until Vince’s family arrived to look after him.

Like Richie, the Good Samaritan gave of his time and his energy, not just his money. Sometimes, when you see a need, it’s easy to throw money at it. But it’s a different kind of sacrifice to give your time and energy.

Often, it involves setting aside your plans for the day or evening. Maybe your child had a rough day at school and needs to talk. Perhaps your friend was injured and needs someone to run errands for her. Challenge yourself to be a Good Samaritan to someone in need today.

God, help me not to be so caught up on my to-do list and tasks that I miss helping someone in need. I want to give freely from my time and my energy.