“Don’t be afraid,” David said to him, “for I will surely show you kindness
for the sake of your father Jonathan.” – 2 Samuel 9:7, NIV 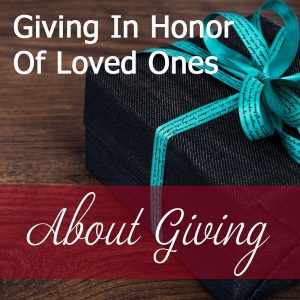 After David became king of Israel, he remembered Jonathan, his best friend who had died in battle. So, he asked his servants if Jonathan still had family in the kingdom.

When he discovered that Jonathan had a son by the name of Mephibosheth, he sent for him immediately. In Biblical times, when a king from a different family took over, it was common for him to kill the old king’s descendants. This practice prevented a revenge killing and protected the throne.

For this reason, David’s invitation to Mephibosheth seemed unusual. As he got closer to his childhood home, Mephibosheth must have felt a variety of emotions including fear, dread, and sadness.

But Mephibosheth quickly found that David longed to show kindness to him, for the sake of his father, Jonathan. His deep love for his friend prompted David’s hospitality.

If you’ve lost a loved one and want to honor their memory, an excellent way to do that is to donate to a charity in their name. Choose a cause in which they showed interest.

If you feel called to do so, you may even want to establish a scholarship or foundation. Giving in someone else’s name can be a special way to keep their memory alive.

God, I want to find a way to do something kind in remembrance of [loved one’s name]. Please show me how I can honor their memory.