“I have received full payment and have more than enough. I am amply supplied,
now that I have received from Epaphroditus the gifts you sent. They are a fragrant offering,
an acceptable sacrifice, pleasing to God.” – Philippians 4: 18, NIV 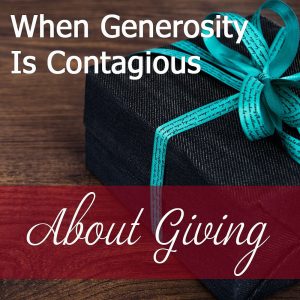 A few months ago, Betty and her husband heard the news that her favorite missionary was still overseas and in desperate need of supplies. There was a small collection box set up at the front of the church and Betty was disappointed to see it unfilled week after week.

She talked it over with her husband, James. Despite living on a limited budget, they decided to spend a little bit of money to send a care package. When another member of the church heard about Betty’s decision, he added a few things to the box. Then another member wanted to cover the shipping costs. A fourth member rallied more people to help.

Betty watched in amazement as their tiny little care package became a huge box filled to the brim with supplies and gifts. “Generosity is contagious,” she told her husband as they went to the post office to send it out.

In his letter to the Philippian church, Paul mentioned how generously they gave to help him on his mission trip. It wasn’t that the people of Philippi were wealthy. It’s just that they gave when others wouldn’t.

No one was willing to help Paul until one person in the Philippian church said yes. This began a domino effect as someone else also volunteered a gift which prompted a third person to be generous.

In the end, the church sent so many gifts that Paul was “amply supplied.” Their contributions were sacrifices back to God, a way to honor their Heavenly Father. Will you be the first to start the kindness domino effect in your community or place of worship?

God, when I’m tempted to hold tightly to my things, help me to remember the importance of giving. I want to live with open hands and an open heart.