“The LORD is gracious and compassionate, slow to anger and rich in love.” – Psalm 145:8, NIV

Stacey felt her stomach clench the moment her car rammed into the stopped one. She ran a shaky hand through her hair and let out a deep breath. “He’s going to be so mad at me,” she repeated softly under her breath.

A moment later, an older woman appeared at her car door.

“Are you OK?” they both asked each other at the same time.

“Is this your first fender bender? Mine was over thirty years ago. You never forget that first one. Now, here’s what you need to do: call your father. Your parents need to know you’re alright.”

Stacey nodded and pulled her smartphone from her purse. She found her father’s contact and called him at his office. She apologized again and again, but the only thing her father seemed to be interested in was her.

“Are you sure you’re not injured? Don’t worry about the car. I can replace it. I can’t replace you,” her father reassured.

Stacey made a careless mistake behind the wheel of her car. But her father’s only concern was for her well-being.

When you sin or make a mistake, God feels compassion for you. He’s not angry or waiting to punish you. Instead, He longs to comfort you.

God, when I mess up, help me to come to You first. I don’t want to try to run or hide. Let me remember that You feel compassion toward me. In Jesus’ name, Amen. 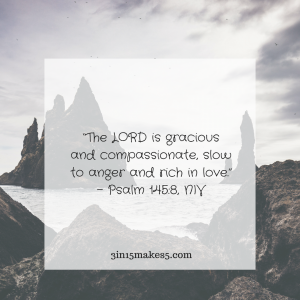