“Then Simon Peter, who had a sword, drew it and struck the high priest’s servant, cutting off his right ear.”
—John 18:10

When Judas betrayed Jesus, he brought with him men to take Jesus by force. But headstrong Peter grabbed a sword. His heart may have been in the right place but as he picked up the weapon, he struck one of the servants.

With one clean stroke, the man’s outer ear fell to the ground. Surprisingly, Jesus doesn’t thank Peter or congratulate him for his skill. Instead, He says, “Put your sword away! Shall I not drink the cup the Father has given me?” (John 18:11)

In Luke 22, Jesus reaches out to the servant. Touching him, He heals the man’s ear. It’s his final healing miracle before the Cross.

At a moment when Jesus is about to enter the darkest time of His life, He has compassion. Jesus understood the servant was fulfilling God’s perfect plan by being there that night.

Sometimes, we rage against the people that are merely trying to do their job—like the police officer that gives a ticket or the coach that pushes you each practice.

But often, these people are there to make sure God’s plan is fulfilled. That police officer who gave you a ticket may have saved you from a horrible wreck. That coach who pushed you may be the reason you become a better athlete.

Don’t resent those that God has placed in your life. Many times, they are doing His will, even if you don’t see it in the moment.

God, help me to respond with grace and compassion to people I don’t like. Teach me to be humble and kind to those around me. In Jesus’ name, Amen. 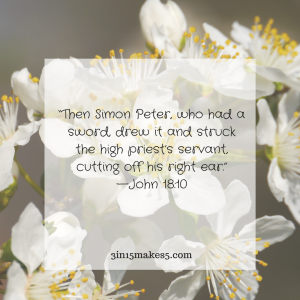