“Help us, God our Savior, for the glory of your name; deliver us
and forgive our sins for your name’s sake.” – Psalm 79:9, NIV

Mary Johnson was at work when she learned her son had been murdered. She struggled through the next few months including the trial of his killer, Oshea Israel. Oshea was just sixteen years old when he was sentenced to twenty-five years in prison.

At the trial, Mary said she forgave Oshea. But she carried around anger and bitterness with her constantly.

She struggled with feeling hate toward Oshea. That changed when she read a beautiful poem about two mothers who were grieving over the loss of their sons. One had lost her son to violence at the hand of the other one’s son.

The poem sparked in Mary a vision for an organization that could help heartbroken mothers who had lost a child. But she knew she needed to work on forgiving Oshea, so she reached out to him in prison.

When the two met together, they talked for over two hours. Mary offered forgiveness again, and before she left, Oshea asked if he could hug her. As she walked out of prison that day, Mary felt all of the hate and bitterness leave her body.

In 2010, when Oshea was released from prison, Mary threw him a party. The two now travel together and speak at events, sharing their story. Her organization is aptly named From Death to Life.

God, help me not to hang onto bitterness and hatred in my heart. I don’t want to drag this anger with me for the rest of my life. Help me to release this burden to You. In Jesus’ name, Amen. 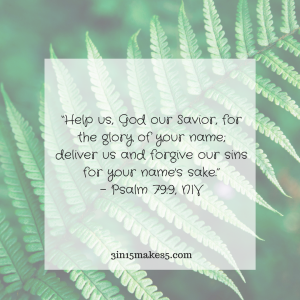