“When we were overwhelmed by sins, you forgave our transgressions.” – Psalm 65:3, NIV

Jason drove it to a high school party where he got drunk. Then he got behind the wheel to drive home.

He didn’t remember the accident, only coming to on the cold asphalt with a first responder leaning over him. Fortunately, Justin was the only car involved in the accident, and he wasn’t hurt badly. But the car was damaged beyond repair.

At the hospital, Justin confessed to his parents what he’d done. Although by that time, they knew what had happened. They were both relieved that their son was fine and his father told him not to worry about the car right now.

But over the coming days, all Justin could think about was that car. He knew his father loved it and his guilt over what he’d done caused him to try and avoid his father.

Finally, after two weeks, Justin’s father sat him down. “I loved that car, it’s true. But not more than I love you. In Psalm 103, there’s a verse about how God removes our transgression as far as the east is from the west. That’s what I’ve done for you!”

When you’ve sinned, you might be tempted to hide from your Heavenly Father, but you don’t have to! Confess your sin, and you’ll find grace and mercy waiting for you.

Lord, I confess my sins. I strayed from Your commands and failed to honor You. Please forgive me and help me to accept Your grace. In Jesus’ name, Amen. 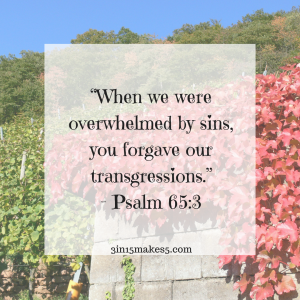