“The LORD gives strength to his people; the LORD blesses his people with peace.” – Psalm 29:11, NIV 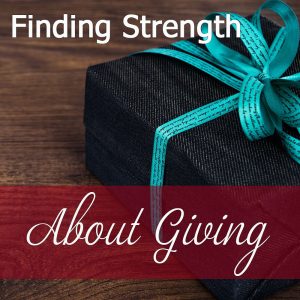 Sam knew his son wasn’t feeling well, but he thought his toddler was just fighting off a virus. But after a few days, his son wasn’t better, and Sam took him to the doctor. The doctor immediately admitted the child to the local children’s hospital.

Sam watched helplessly as his little boy became sicker and sicker. His wife became fearful, and he didn’t know how to comfort her. His other children were scared and kept asking when their brother was coming home.

Sam didn’t have an answer. He was busy trying to be strong for his family. He didn’t want to let them down. But he was scared, too.

After another grueling round of testing, his son finally fell asleep in his wife’s arms. Sam slipped out of the tiny hospital room and went to the cafeteria. His stomach twisted at the smell of the food and he headed outside instead.

He walked into the courtyard and fell to his knees. He’d never felt more lost or alone. He wasn’t even sure what to pray.

That’s when he heard a mechanical whir noise, and he turned to see an older man in a motorized wheelchair. The man gave Sam a small smile and asked him about his day.

Sam poured out his heart to the stranger, sharing all his fears and his sadness. When he finished, the other man gently encouraged him.

By the time he left to check on his son again, Sam felt refreshed and peaceful. That conversation has given him the strength he needed to keep fighting for his family.

God, I need strength to keep going. I feel overwhelmed, and I need help. Please give me strength and peace so I can rest in You.