“Bear with each other and forgive one another if any of you has a grievance against someone.
Forgive as the Lord forgave you.”– Colossians 3:13, NIV

Samereh Alinejad lives in Iran. Her eighteen-year-old son was stabbed to death when he got into a street fight. She’d already lost one son and losing another son only added to her heartbreak.

Her son’s killer, Balal, spent seven years in prison, awaiting his death sentence. But as the time for his execution drew near, Samereh said her son appeared to her in a dream, begging her to forgive his killer.

When family came to visit in the days before the execution, no one pressured Samereh to forgive. They showed up to offer support and condolences. Still, Samereh couldn’t sleep that night.

The next day, she showed up at the gallows with her husband. She watched as a noose was placed around Balal’s neck. This was the moment she had waited for, the one that she’d thought would bring her peace.

Instead, she found herself calling out to free the young man. The anger and hate she’d been holding vanished, and for the first time in years, she felt free.

Balal’s mom had also been present at the execution scene. When she saw the display of mercy, she knelt to kiss Samereh’s feet in gratitude. But Samereh lifted the woman up and embraced her, the two mothers united in the middle of their shared pain.

God, forgiveness is a struggle. But I want to show mercy and kindness to those who have hurt me. Give me the strength to release this burden and live free. In Jesus’ name, Amen. 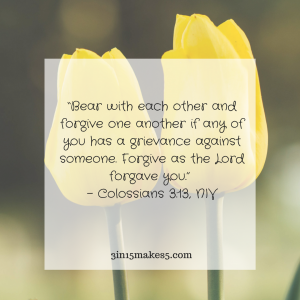