“A father to the fatherless, a defender of widows, is God in his holy dwelling.” – Psalm 68:5, NIV

When James was just three years old, his father was killed overseas. From that day forward, Gary, his father’s best friend, took the boy under his wing.

Gary took James camping and showed him how to fish. He told him stories about what James’ father had been like and the adventures they’d gone on.

When James was in grade school, Gary taught him how to throw a baseball, and he showed up for every high school football game that James played. He even took James shopping and bought a suit so he could go to prom.

In his sophomore year of college, James received an urgent call from his mother. Gary had a stroke and was in the hospital. James dropped everything and came to Gary’s bedside, but the older man never recovered.

Later, a nurse gave James a box of Gary’s personal effects. Up late one night and unable to sleep, James went through the box. He stopped when he came across Gary’s Bible.

Opening it carefully, the worn pages flipped to Psalm 68, where verse 5 was underlined in red: “A father to the fatherless, a defender of widows, is God in his holy dwelling.”

Seeing the words made James thankful for Gary’s faith and his constant care and provision for a little boy. When James was married, he chose to continue Gary’s work by becoming a foster parent and welcoming boys into his home that had never known the love of a good father.

God, thank You for being a Father to the fatherless. Let me show Your love and kindness to a child in need today. In Jesus’ name, Amen. 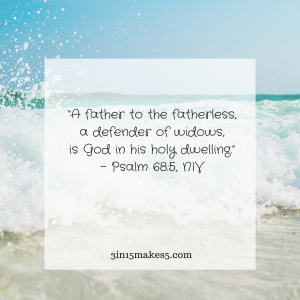