Then he said to them, “My soul is overwhelmed with sorrow to the point of death.
Stay here and keep watch with me.” – Matthew 26:38, NIV

It was a mild August day when Amelia climbed into the passenger seat of her car. She and her husband were headed to the beach to celebrate her promotion. “We’d only been married five months at that point. We were newlyweds, and I was still learning so much about him.”

But Amelia and her husband never made it to the beach that day. Instead, they were hit by a drunk driver who crossed into their lane. He hit their car head-on.

Amelia’s husband was killed on impact, and she was left with life-threatening injuries. She had broken her back in two places, needed stitches on her face, and had a serious concussion.

Her body began to heal, but her spirit felt broken. “Everyone told me just to forgive the other driver. I got a lot of pressure to move on from other people. One person told me if I didn’t forgive, I was worse than the drunk driver.”

Then came the day Mary showed up in Amelia’s hospital room. She was a widow from a local church who often reached out to other widows.

Amelia shared her story, crying through parts of it. “How am I supposed to forgive?” she whispered.

Mary squeezed the woman’s shoulder, “Right now, your only job is to grieve. You need to process what you’re feeling; all the sadness, rage, and pain. Let it come.”

Sometimes, it can be tempting to tell someone going through an injustice to “just forgive,” but that advice can stunt the grieving process.

“It only compounds loss,” Mary explains. “So now, we have someone who’s grieving, and they feel this guilt and sense of isolation added to it. Many people don’t realize this, but Jesus grieved in the Garden of Gethsemane. Grieving is an important part of the healing process.”

God, help me to grieve with those who grieve. Let me be a loyal friend who welcomes the broken into Your presence. In Jesus’ name, Amen. 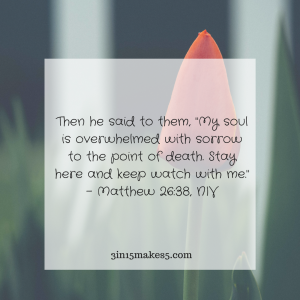