Kayla’s first memory was a tender one. Her father had taken the day off work so he could take her and her sister to the zoo. But she was four, and she quickly grew tired from walking around.

Her father lifted her onto his shoulders. There, she sat while he pointed to the various creatures. The three of them took turns making the animal noises and watching to see which ones would respond.

A few weeks later, Kayla’s older sister was diagnosed with a rare form of cancer. She lived for six more months until she lost her battle.

On what would have been Kayla’s sister’s birthday, her father came home. His arm was swollen and red. He slowly moved his sleeve to reveal a tattoo, a picture of Kayla’s sister. “That way, she’s always with us,” her father explained.

Years later when Kayla first read Isaiah 49:6, she thought of her father. “He loved my sister so much, and he wanted the world to know. He was proud of her, proud of her fight and her spunk.”

God, thank You for engraving me on Your palms! You see my life, and You’ve never missed a moment of it. In Jesus’ name, Amen. 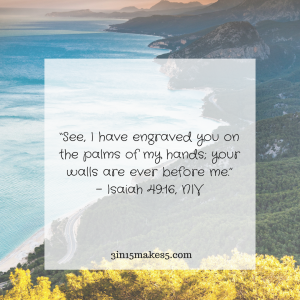