“Solomon had twelve district governors over all Israel, who supplied provisions for the king and the royal household. Each one had to provide supplies for one month in the year.” – 1 Kings 4:7, NIV

The nation of Israel was experiencing an incredible time of prosperity. God’s chosen people were in the land He had prepared for them, and they were multiplying rapidly.

As the chosen king, Solomon’s job was to run the entire country. He was responsible for everything and everyone. But rather than trying to do it on his own, Solomon selected governors.

Each governor was entrusted with big responsibilities including gathering provisions for Solomon and the royal household. Because he had people in place that he could trust, Solomon was able to focus on his own duties.

“God gave Solomon wisdom and very great insight, and a breadth of understanding as measureless as the sand on the seashore.” (1 Kings 4:29)

There’s a dangerous myth about leadership that suggests effective leaders are “lone wolf” types who do everything themselves.

But Solomon was wise enough to reject this belief. Instead, he built a community around himself so he could lead the people effectively.

Are there areas in your life that could benefit from a community? Are there responsibilities you need to be sharing with others?

God, help me to lead with wisdom. I know I can’t do it all myself, so I ask You to send me Godly men and women. Make them disciples after Your own heart. In Jesus’ name, Amen. 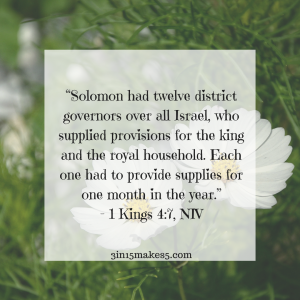