“Do not repay evil with evil or insult with insult. On the contrary, repay evil with blessing,
because to this you were called so that you may inherit a blessing.” – 1 Peter 3:9, NIV

Amy Ford was nineteen when she discovered she was pregnant. She opted to abort the baby, but minutes before the procedure, she fainted. She took it as a sign and canceled the abortion.

She decided she would keep the child and raise it as her own. She told her friends, family, and church about her decision. Some people chose to pull away from her, and she felt lonely during her pregnancy.

When the baby’s father proposed, Amy said yes. She was four months along when they made the decision. So she reached out to a pastor she knew and asked him to perform the ceremony.

But the pastor refused. He claimed he couldn’t bless a union like theirs because Amy and the baby’s father had sinned greatly.

Years later, the same pastor got in touch with Amy. He shared that his response to that situation had haunted him for years. He longed to make it right.

He had seen Amy launch Embrace Grace, an organization dedicated to reaching out to mothers of unplanned pregnancies. So, the pastor invited her to speak to his congregation.

After her message, he stood up and publicly apologized. Amy and her family forgave the pastor, and now he’s a beloved mentor to their family.

It’s not easy when someone within the church hurts you. But healing and redemption are possible through the gift of forgiveness.

God, when those in the church hurt, help me to repay them with a blessing. Give me the courage and strength to show grace. In Jesus’ name, Amen. 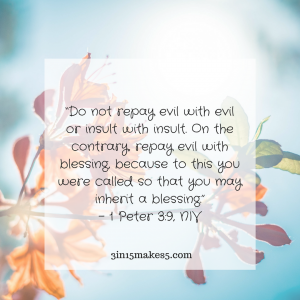