“For I know the plans I have for you,” declares the LORD, “plans to prosper you and not to harm you, plans to give you hope and a future.” – Jeremiah 29:11, NIV

Alice was on her annual father-daughter vacation when she was twelve years old. On one of their adventures, they kept running into detours. No matter which way they went, it seemed their plans wouldn’t come to pass.

Alice was growing more frustrated at missing scenic moments she’d been looking forward to for weeks. When she asked her father why he wasn’t upset, he simply said, “God’s plan is always so much better than mine.”

Those words came back to Alice years later when she was graduating from college. She’d hoped to spend a year in a remote village, teaching English to the local children. But the funding never came through, and Alice had to scrap her plan.

At first, she struggled with what happened. She was certain that God had told her to do this so why was He blocking her goal after all of that? Why didn’t He move supernaturally and arrange all of the pieces for her?

While Alice waited, she took a job at a local advertising agency. While she was there, she met and fell in love with one of the agency’s new clients. He was an entrepreneur who was passionate about education in third-world countries.

If Alice had gone on her original trip, she wouldn’t have met her husband or given birth to their two beautiful children. Now she says, “The detour is always worth the wait! I would never have guessed what God was doing back then.”

It’s frustrating when we have a goal or desire that keeps being thwarted. But keep in mind that God always has a good purpose for your detours.

Lord, help me! This doesn’t make sense. I thought I was doing the right thing. I was sure of it; only now it’s not coming to pass. I know this is one of Your detours, so help me to be patient and keep trusting You during this season. In Jesus’ name, Amen. 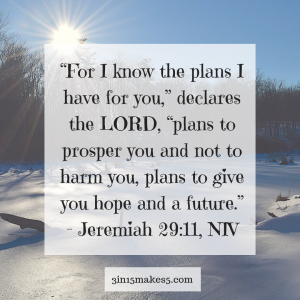