The King will reply, “Truly I tell you, whatever you did for one
of the least of these brothers and sisters of mine, you did for me.” – Matthew 25:40 (NIV)

Paul owned a large 13-passenger van that he drove to church every Sunday. He used the van to transport those who wouldn’t be able to attend unless they had a ride, like Doris and her granddaughter, Katie.

One week, Paul was in a great mood. After months of scrimping and budgeting, he and his wife had managed to save enough money to buy a new washing machine. Since their old one had gone out months ago, they had to drive to a laundromat that was miles away. Not wanting to go further into debt, they’d patiently saved.

When Paul stopped outside of Doris and Katie’s tiny house, he got out and helped the disabled woman inside the warm van. Katie, her teenage daughter, hopped into the passenger seat with her usual enthusiasm.

After she finished off a granola bar, Katie pulled off her boots, and Paul glanced down. He could see just a bit of plastic bag sticking out of the top of her sock. “They leak?”

“My grandpa used to do the same thing,” Paul said, giving her a gentle smile.

When Paul got home that night, he told his wife about Katie. Together, they agreed to hold off on the purchase of their new washer for a few more weeks. Instead, they got the girl a gift certificate to a local shoe store and quietly slipped it to Doris.

The next week at work, Paul’s boss called him in. He told him he’d been doing a great job and gave him an unexpected holiday bonus for the same amount as the gift card.

God when I see others in need, give me the courage to act. Help me be filled with compassion for those around me. In Jesus’ name, Amen. 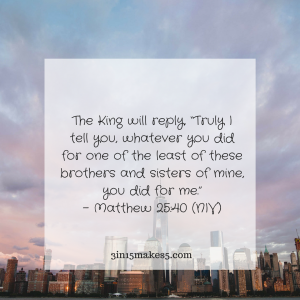