“A woman in that town who lived a sinful life learned that Jesus was eating at the Pharisee’s house,
so she came there with an alabaster jar of perfume. As she stood behind him at his feet weeping,
she began to wet his feet with her tears. Then she wiped them with her hair, kissed them and
poured perfume on them.” –Luke 7:37-38, NIV

Simon was a religious leader living in Capernaum. He invited Jesus to dinner one night. Maybe he was intrigued by the thought of the Messiah. Perhaps he hoped to catch him in some half-truth to prove that Jesus wasn’t who he said he was.

Whatever his reason, Simon extended the invitation and Jesus accepted. During those times, it was customary for a host to offer water to cleanse the feet of his guests.

The host would also kiss a guest and anoint his head with oil. These acts were done to show great love and honor toward a guest.

But Simon has done none of these things for Jesus. Instead, he has shown great dishonor and ignored his guest’s needs. So, Mary comes forward. She is a sinner, a woman that many in that time considered unclean.

While she’s attending to Jesus, those around her begin to make judgments. Maybe there were loud whispers, awkward stares, or lewd comments made.

It’s Jesus who defends her saying, “Therefore, I tell you, her many sins have been forgiven—as her great love has shown. But whoever has been forgiven little loves little.”

When someone has been forgiven by God, and it changes their hearts, they love BIG. They choose to embrace grace, and they’re quick to honor Jesus in all things.

God, help me to be someone who loves You and honors You regardless of who’s around. Fill me up with Your love and let me pour it into others that need Your grace. In Jesus’ name, Amen. 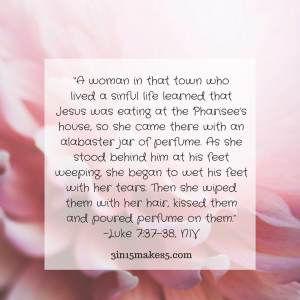