“But to you who are listening I say: Love your enemies, do good to those who hate you, bless those who curse you, pray for those who mistreat you.” – Luke 6:27-28, NIV

Dirk Willems was a Dutch Christian. Because of his faith, he was sent to prison. After some time, he made a daring escape attempt in May 1569.

But his disappearing act didn’t go unnoticed. One of the guards gave chase.

As Dirk was running, he found a frozen pond with a thin layer of ice on top. The prison rations had kept him trim, so Dirk quickly scampered across the icy ground.

The prison guard attempted to follow him, but the ice cracked under his weight. He slipped into the freezing water and began crying out for help.

At the noise, Dirk turned and saw the drowning man. He was faced with the most important decision of his life—go forward and enjoy freedom or go back and rescue his enemy?

He decided to rescue the guard, saving the man from the ice. For his reward, he was recaptured, tortured, and killed anyway.

Most of us will never be faced with the decision that Dirk was. But if you were, what would you choose? Would you save your enemy, even at the expense of your own liberty and life?

Lord, give me the courage to be like Jesus. Let me show grace toward my enemies and others who hate me. Remind me again of Your amazing forgiveness and redemptive love. In Jesus’ name, Amen. 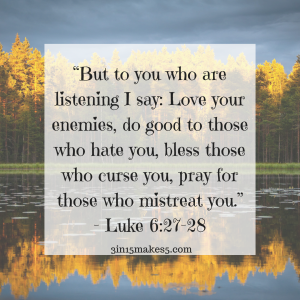