Leah became pregnant and gave birth to a son. She named him Reuben, for she said, “It is because the Lord has seen my misery. Surely my husband will love me now.” – Genesis 29:32, NIV

Leah watched as her sister, Rachel, flirted with Jacob. She watched as they courted, the secret glances they stole at each other when they thought no one else was looking. She admired the way Jacob worked for seven years so that he could marry Rachel.

Then her father came, just hours before her sister’s wedding. He shoved the bridal clothes at her, demanding she slip into them and wed Jacob in her sister’s place.

The next morning, she could hear Jacob shouting at her father, demanding to know why he’d been betrayed. Then seven days later, Jacob married Rachel, the sister he truly loved.

Leah was trapped in a loveless marriage, but God saw her misery. He sent her a son, and she named him Reuben. She was certain that now her husband would love her and in doing so, made the mistake of placing her worth in her husband and her children rather than God. That’s why she’d spent years feeling so empty and chasing Jacob.

But somewhere along the way, Leah accepted her true identity as a favored daughter of God. She understood that God loved her unconditionally and let that love fill her with peace and joy.

She conceived again, and when she gave birth to a son, she said, “This time I will praise the Lord.” So she named him Judah. Then she stopped having children. – Genesis 29:35, NIV

God, help me to remember my worth comes not from my relationships. Like Leah, let me rest in You, content with the knowledge that I am Your beloved child. In Jesus’ name, Amen. 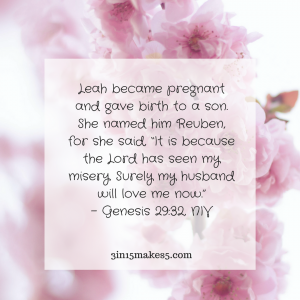