“The midwives, however, feared God and did not do what the king of Egypt had told them to do; they let the boys live.” – Exodus 1:17, NIV

The Israelites had lived in Egypt since the great famine. But as the years passed, a new Pharaoh came to power.

He watched the Israelites multiply, so he sent a decree to the midwives in the land. Any baby boys born to Israelite women were to be killed on the spot.

But two midwives, named Shiphrah and Puah, chose to defy Pharaoh and allowed the Israelite children to live. Eventually, word reached Pharaoh and he demanded to know what was happening.

The midwives answered Pharaoh, “Hebrew women are not like Egyptian women; they are vigorous and give birth before the midwives arrive.” (Exodus 1:19)

Because of their brave stand, God granted both Shiphrah and Puah families of their own. These two women became defiant mothers.

It’s not easy to stand up to evil. It’s risky, and in some cases, it could be deadly. But these two women didn’t let the threats stop them. They were faithful to God anyway, and He rewarded them for it.

God, when I’m tempted to ignore evil, give me courage. Remind me of the bravery of Shiphrah and Puah. Help me to speak up for the oppressed and protect them. In Jesus’ name, Amen. 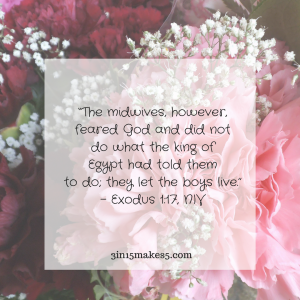