Carrie had spent years longing for children of her own. But an auto-immune disease had robbed her of the ability to have kids. So, she and her husband decided to adopt a child instead.

But twice the adoptions fell through. Each failed adoption only added to her hurt. She often found herself asking, “Why God? I long to be a mother and You keep shutting down every avenue. I don’t understand.”

A few weeks later, a single mom with three daughters moved into the apartment next door. She struggled to pay for childcare, so Carrie opened up her apartment to the young girls.

She kept cookies and other snacks for them, let them play in her home office as she worked, and taught them how to do girly activities like paint their nails.

For two years, she poured into the girls until their mom was in a better place. She had remarried and was relocating to another state to be with her new husband. But she thanked Carrie for all she’d done.

When the girls left, Carrie felt the same aching emptiness. Then she woke up two days later to a voicemail on her phone. A social worker was looking to place a baby with a family immediately and wanted to know if Carrie and her husband would be interested.

A year later, after the adoption had been completed, Carrie looked back on all the failed adoptions. “God wanted me to minister to those girls. I just didn’t realize it at the time. God was preparing my heart to love them before I ever even met them.”

God, when it looks like You’re closing every door, grant me patience and faith. Help me to hang onto You even when it feels like all of my dreams are shattered. In Jesus’ name, Amen. 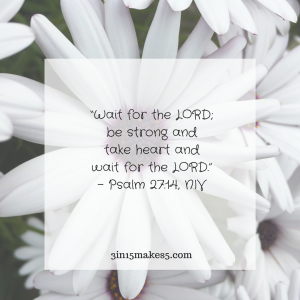