The LORD said to me, “Go, show your love to your wife again, though she is loved by another man
and is an adulteress. Love her as the LORD loves the Israelites, though they turn to other gods
and love the sacred raisin cakes.” – Hosea 3:1, NIV

One of the most striking examples of forgiveness in Scripture is the story of Hosea. Hosea was a prophet living in Israel during a time of great unrest.

The king on the throne frequently changed due to various assassinations. The Israelite people were being heavily taxed by another nation and lived in fear of being conquered.

But God had a message of hope and restoration for His people. That’s why He commanded Hosea to marry. But He didn’t want Hosea marrying just anyone. Instead, He instructed Hosea to wed a prostitute by the name of Gomer.

After being with Hosea for some time and bringing kids into their union, Gomer leaves Hosea. Hosea goes searching for and buys Gomer back so he can restore her to a right relationship with himself.

This was done to illustrate that while Israel (and by extension those who love God) may be unfaithful at times, God (much like Hosea) is completely faithful. He loves you, even when you are far from Him, and there’s no price He won’t pay to bring you home.

God, You have stood with me through everything. You surround and protect me, caring for me always. Thank you for Your constant faithfulness! In Jesus’ name, Amen. 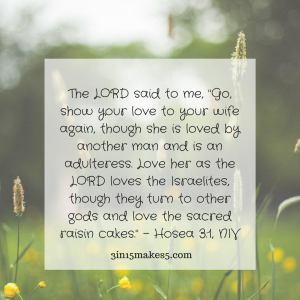