“Be kind and compassionate to one another, forgiving each other,
just as in Christ God forgave you.” – Ephesians 4:32, NIV

Andy lived in a small farming community in Idaho. When he was fifteen, he got into a fight with another student, seventeen-year-old Larry. Andy pushed Larry down the stairs. Paramedics were called, and Larry was taken to a local hospital.

After several days, Larry woke up to the news that he was paralyzed. Overnight, his baseball scholarships disappeared, and his girlfriend dumped him. But he couldn’t stop thinking about Andy.

“I know most people would think I hated him. But I didn’t. All I could think about was my younger brother. He’s done some dumb stuff, and I couldn’t imagine how he’d feel if he seriously hurt somebody.”

When Andy was brought to trial, Larry was there. He testified on the other boy’s behalf and begged the jury to show mercy. “He’s already changed my life forever….he knows that, and I know it. I don’t want his life to be messed up, too.” Larry explained.

Because of Larry’s compassion, Andy was sentenced to only a year in a juvenile detention center. After that, he’ll be on probation for a few years.

God, when someone else’s decisions impact my life, let me be forgiving and gracious. Not because of me, but because of Jesus and the forgiveness He’s granted me. In Jesus’ name, Amen. 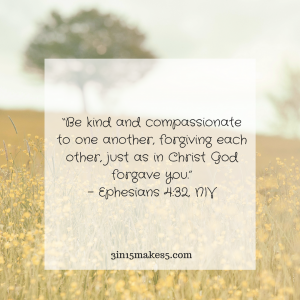