“You intended to harm me, but God intended it for good to accomplish what is now being done,
the saving of many lives.” – Genesis 50:20, NIV

Joseph was one of the first victims of human trafficking. His jealous brothers sold him, and he was taken to be a servant in a foreign land.

The fear he must have felt as he traveled to a strange country had to be overwhelming. But what could he do? Thousands of miles from home and without any money, he had no options.

So, Joseph became a servant. He worked hard, and it wasn’t long before other people began to notice. Because God was with him, Joseph quickly advanced to be his master’s, right-hand man. He was in charge of everything Potiphar owned.

Potiphar’s wife took special notice of Joseph and began harassing him on the job. When he continued to decline her advances, the woman eventually claimed that Joseph had assaulted her.

Joseph was sent to prison without a trial or defender. But even there, God was with him, and Joseph prospered. Eventually, Joseph became the second most powerful man in Egypt, serving directly under the Pharaoh.

Years later, Joseph’s brothers were worried about retaliation. They came to him promising to be his slaves and Joseph was finally in a position to pay them back. He could have ordered them and their families to be executed. He could have sent them to prison for what they did.

This is his moment for retribution, but Joseph never takes it. That’s a simple way to tell if you’ve forgiven someone. Ask yourself, “If I had the opportunity to repay someone for the evil they’ve done to me, would I take the chance?”

God, let me be like Joseph, who never sought to hurt his brothers for the evil they’d inflicted on him. Instead, let me focus on You and Your plan to redeem this situation for Your glory and my good. In Jesus’ name, Amen. 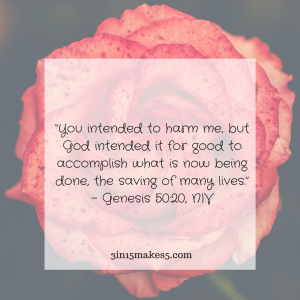