All three of my boys are in high school. They are still deciding what career they want to choose, so we were happy to review the CashCrunch Careers survey from CashCrunch Games. After signing up, the first step was to take the 75-question survey online. Each question asked you to pick between two words that best fit you. I’ve included an example in the picture below.

Once the survey was complete, we submitted it and then received a report. The report was split into four main sections: career work styles, motivators & de-motivators, career attributes, and career match.

This section provides a paragraph describing your personality, work style, and other traits. Even though it is just a paragraph, it is packed with information. Since all four of us took the survey, we each received a different response. I found them to be fairly accurate. Below is an example from Child #2.

This section had a little bit more information, including the reasons that motivate or don’t motivate you to do something. There was also a column for each listing out examples. The following is a screenshot from Child #3. 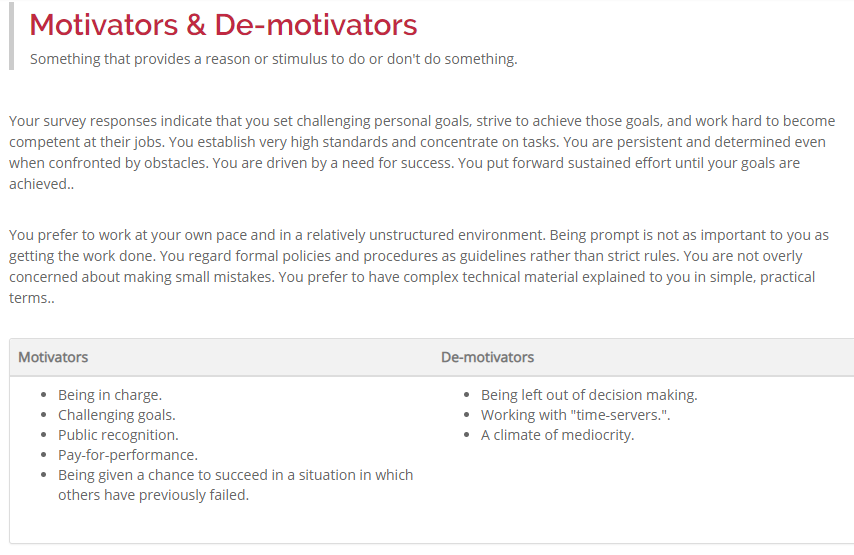 This section listed specific attributes or strengths. For each strength, there was a brief description and in parentheses a word or words that are synonymous. Here is an example from Child #1. 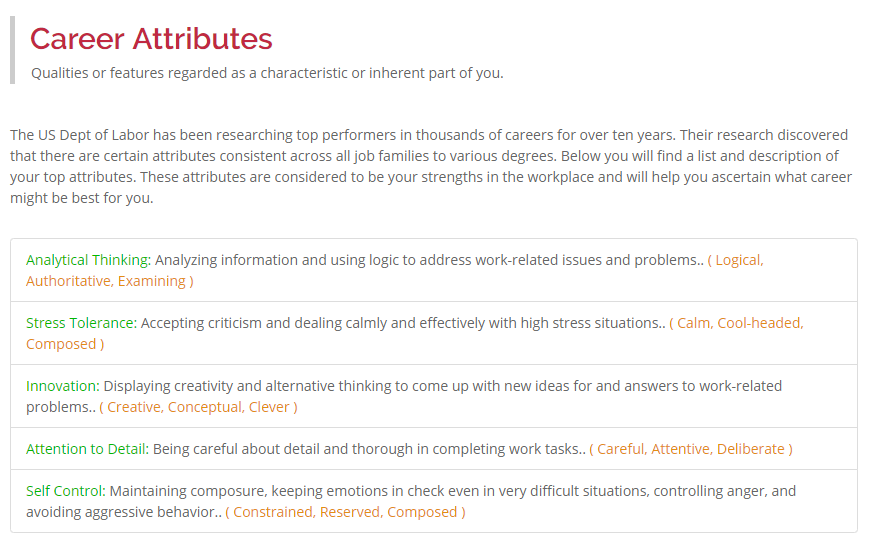 The final section of the report was the career match. It gave a brief synopsis of research and how the jobs were matched to specific skills. This section was the same for all four reports.

Then there was a list of clickable links to the matching jobs. Once again, these were the same for all four reports, including being in the same order. 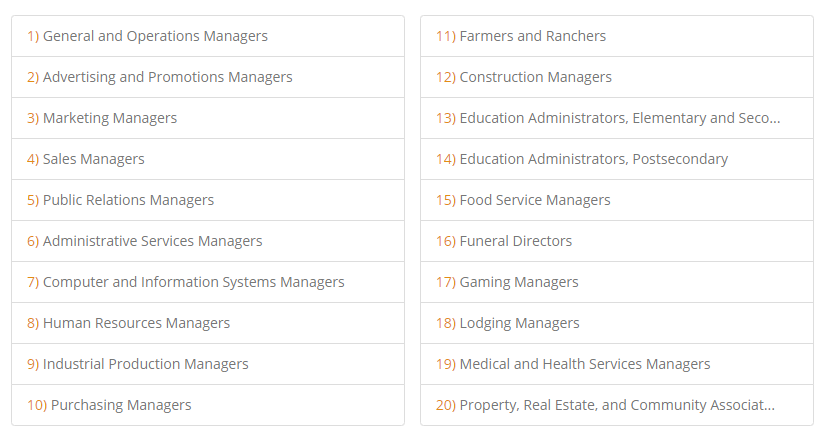 Once you click on one of the matching jobs, you are taken to a new page with a description of what that job entails. Here is an example of #1 on the list: General and Operations Managers.

Further down the page, there were attributes, abilities, work values, and skills for that specific job. This picture is from the General and Operations Managers section.

The college tab listed colleges that you could attend that offer this type of job skill. I zoomed in on NC (since that’s where we live) for the General and Operations Managers.

I don’t think the map does a good job of identifying all schools that you might be able to attend for a certain degree. For example, when researching computer programming, it only lists 12 schools for the entire country to offer this type of degree (see photo). 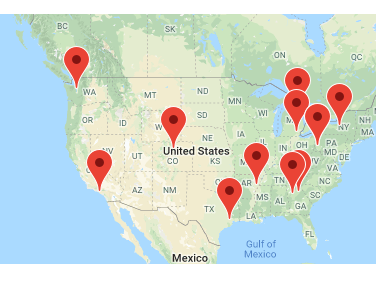 The video tab included a video for each career. These videos appeared to have been filmed back in the late 80s or early 90s, so they are a little out of date. For example, see the picture below of the computer programmer video. 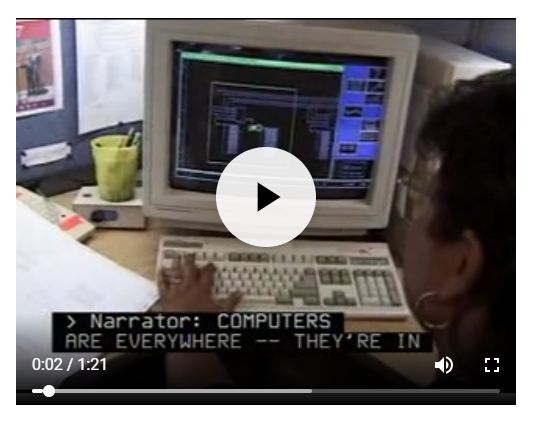 After reviewing the report, you can then take the time to explore all the different career options. There is a navigation bar on the left side of the screen that includes categorizes by specific fields.

For each career category, there were numerous specific job choices. There wasn’t a search bar, so you sometimes had to guess which category a specific career would be in.

I’ve included a screenshot from the Business, Management and Administration section which includes General and Operations Managers (#1 on our matched jobs). 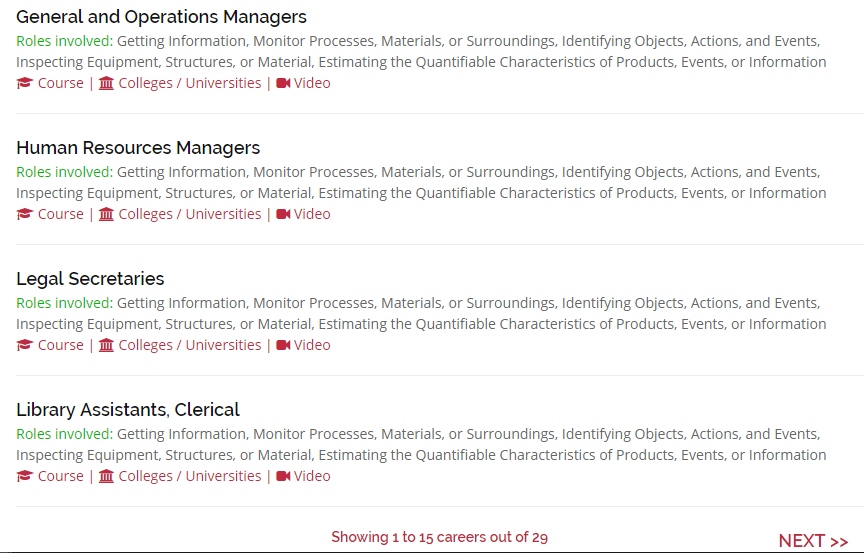 The survey did a good job of determining our different personalities and skills. I’ve highlighted a few of the items that stood out for each of us.

For me, it picked up on “genuine concern for others and desire to produce work that meets the highest standards.” It mentioned written communication and detailed expectations as motivators and lateness in others as a de-motivator. A few of the career attributes included self control and dependability.

For Child #2, the report mentioned being very active, high-spirited, and energetic. Motivators included the ability to set own agenda and independence and freedom. De-motivators included routine and being alone in a room. Career attributes included persistence and leadership orientation.

For Child #3, the report mentioned setting high standards for personal performance and being determined to get the job done. Motivators included challenging goals and being in charge. De-motivators included being left out of decision making and a climate of mediocrity. Career attributes included innovation and analytical thinking.

I think the survey did a really good job of picking up on traits and abilities. Having the career attributes will be helpful to the boys as they continue to choose a career field. It has given them more ideas to explore. I’ve also included the boys’ comments as bullet points below.

The videos were not current, especially for computers and other technology. There are also new jobs that are out there that weren’t included, like app creation and GIS mapping. The interface was a little difficult to navigate. There wasn’t a search feature, so you had to click around to find a specific career.

All four of us had the same ranking of jobs. Since we each had different motivators, de-motivators, and career attributes, I would have thought that there would have been a difference in the order of jobs. Also, I thought the report would include actual jobs (or job suggestions), not just basic categories. For example, I took a similar survey when I was in high school, and it listed out teacher, accountant, pharmacist, and others as suggestions.

The boys also had some comments that I have included:

I think the CashCrunch Careers survey and the report itself were valuable. It provided a good representation of skills, traits, and motivators/de-motivators. I was surprised at how well it seemed to pick up on some things with only a 75-question survey. I liked that each career included tasks, activities, abilities, work values, and skills.

However, I think the careers and videos are outdated. The interface was difficult to navigate. A search feature would have been helpful.