They called themselves The Three Musketeers as kids. Liam, Noah, and Jackson were friends since elementary school. They did everything together and were constantly playing pranks on each other.

Instead of going their separate ways after high school graduation, they decided to rent an apartment together. But shortly after turning twenty, Liam became very ill. He had no family to look after him, so Noah and Jackson took turns caring for him.

They brought him to doctor after doctor. No one could explain why Liam had suddenly lost the ability to walk. Noah and Jackson suspected he had a neurological disease, but neither knew enough to help their friend.

So, when they heard about a man named Jesus that was healing people, they decided to bring their friend. “Maybe this Jesus guy can help you, buddy,” Jackson said as he carefully loaded his friend into the back of his car.

Noah grinned, “Who knows? Maybe you’ll be running a marathon by this time tomorrow.”

But when Jackson and Noah arrived, they quickly saw the crowds were thronging Jesus. “There’s no way we’ll get close enough to get his attention,” Jackson said.

“Hold on, I have a crazy idea,” Noah said. The two men gathered a tarp from the trunk and made a makeshift gurney then carefully moved their sleeping friend.

They climbed to the roof of the house where Jesus was and peeled away shingles until they had a large opening. Then they lowered their friend down until he was right in front of Jesus. Jesus not only forgave their friend, but He also healed him from his disease.

Sometimes, God sends people into our lives to help us seek His forgiveness. It might be a friend that prays for you faithfully, a parent that won’t give up on you, or a sibling who always has your back.

Thank You for the friends that carried me when I’ve been hurt, God. Let me return that kindness and carry someone else to You when they need it. In Jesus’ name, Amen. 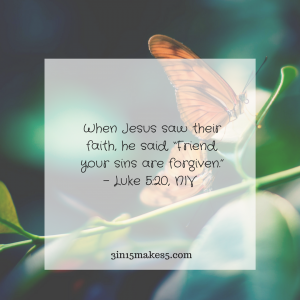