Dan was in a meeting when he got the message that his elderly father had fallen and was injured. He dropped everything and immediately booked a flight back to his hometown.

When he arrived at his childhood home, it was clear his dad was having difficulty caring for himself. The yard was overgrown. There was a stack of unpaid bills on the table. The insurance policy on the house and car had both lapsed.

Dan had known his normally responsible father was becoming forgetful, but now he suspected it might be more serious. A doctor at the hospital where his elderly father was receiving care confirmed the news—dementia.

All his life, Dan had relied on his father. The quiet man had always been a tower of strength for his family, carrying them through seasons of hardship with gentle grace.

During the next few years, Dan tenderly cared for his father. He moved him into his home and helped him with everyday tasks. Still, Dan struggled with watching his father slip away.

One day, a friend sent him a text about Deuteronomy 5:16. The words comforted Dan and reminded him that God loved him.

Few things are more difficult in life than watching a parent age and grow frail. Many adult children grieve for their parents and their changing relationships. But no matter what happens, know that God sees. He remembers your name. He understands your pain. He’s holding onto you and your parent.

Lord, help me! Some days, I feel a million miles from my parent. Their suffering is breaking my heart, and I can’t heal them. Give me peace in the midst of this season. Show me how to support my parent and love on them during this time. In Jesus’ name, Amen. 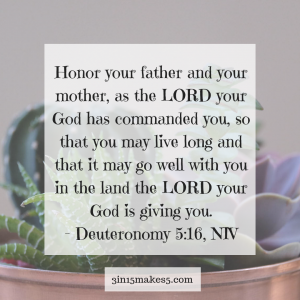