“How good and pleasant it is when God’s people live together in unity!” – Psalm 133:1, NIV

James and his brother William were close friends growing up. Whatever one did, the other was sure to follow. Their mother sometimes joked that the boys were actually twins she’d had two years apart.

When the brothers grew up, they decided to become farmers. They bought hundreds of acres and started planting their crops. They shared their tools and knowledge with each other freely. When one succeeded, he was quick to help the other.

Then one afternoon, a fight broke out between William’s hired hands and James’ helpers. Both were so convinced the other was wrong that they let their sweet bond sour. As the years passed, they both kept to their farms.

When a handyman appeared at William’s farm begging for work, William brought him outside. He pointed to a muddy area, “A stream used to run through both our lands to water our livestock, but my brother has built a dam. It waters only his acreage now.”

Then William showed the handyman a grove of trees and bushes. “I want you to make a fence there,” He explained. “Build a big privacy fence so my brother will forever be a stranger to me.”

The handyman agreed, and William brought the man all the tools and lumber he would need. He left to handle more business on his farm and finally returned that evening.

He stopped in his tracks as soon as he saw the handyman’s work. Instead of a fence, there was a beautiful bridge. The work was intricate, and the details were breath-taking.

Before he could ask the handyman about it, William saw James running across the bridge. “You built a bridge to welcome me back! What a special day this is!”

When someone hurts you, it’s natural to want to shut them out. But instead of ignoring them or sending them away, look to restore fellowship with your friend or loved one.

God, let me be a bridge builder, not a fence builder. Let me be quick to forgive others and warmly welcome them back into fellowship. In Jesus’ name, Amen. 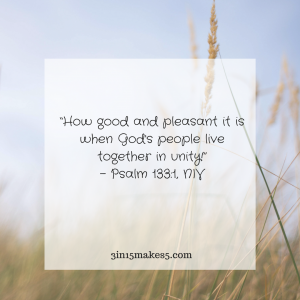