“But Esau ran to meet Jacob and embraced him; he threw his arms
around his neck and kissed him. And they wept.” – Genesis 33:4, NIV

Esau and his younger brother, Jacob were twins born to Isaac and Rebekah. From the time they were in the womb into their adult years, they fought. The two had such distinct personalities that they were as different as night and day.

When he was hungry, Esau sold his birthright to Jacob. He exchanged it only for a bowl of a stew; a temporary meal is what he traded for his heritage.

After time passes, Isaac ages. He’s no longer able to see, and he knows his time on earth is growing short. He calls for his older son Esau to prepare him a meal and then he’ll bless him.

But Jacob disguises himself and claims the blessing. This enrages Esau, so Jacob flees to a distant country. For the next two decades, the brothers remain strangers.

When Jacob returns home, he hears that Esau is coming to greet him. He’s terrified that his brother plans to slaughter him and his family. So, he goes humbly, bowing before his twin.

Esau ignores the gifts and instead tackles Jacob in a hug. Together, they weep, and all is forgiven between the two.

Do you have a sibling you need to forgive or long to reconcile with? Take a page out of Jacob’s book and pray over your reunion.

God, You see what’s happened between me and (sibling’s name). I ask for healing and forgiveness over this situation. Please restore us to a loving relationship. In Jesus’ name, Amen. 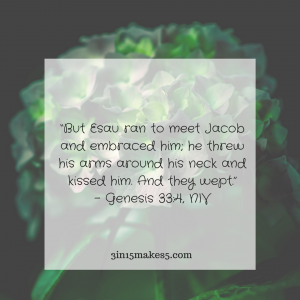